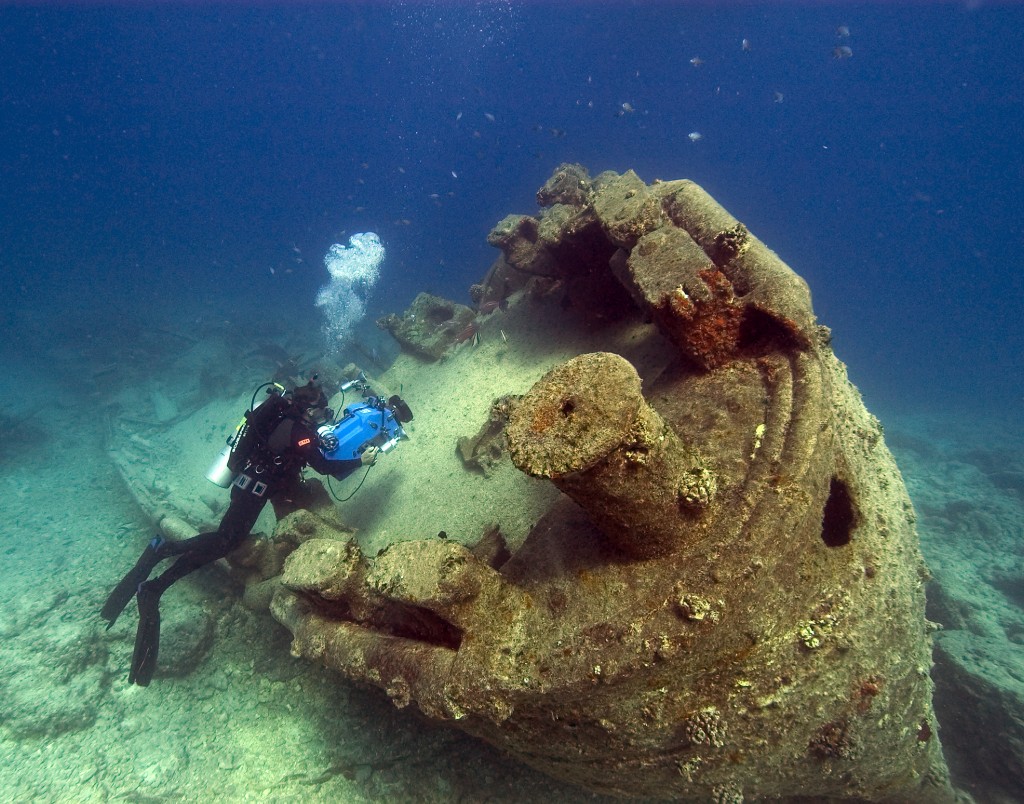 NOAA diver John Brooks inspects the remains of the USS Macaw in Hawaii. (Photo: Robert Schwemmer, CINMS, NOAA). Not the Caribbean, but you get the idea.

In a new study, researchers at the University of Arizona are the first to use records of shipwrecks in the Caribbean to gain insight into historical hurricane activity.

The paper, published in Proceedings of the National Academies of Science this week, reported a 75 percent reduction in the number of Caribbean hurricanes between 1645 and 1715, coinciding with a period of decreased solar activity and cooler-than-average climate. The researchers also compared tree-ring data during this period, obtained from a site in the Florida Keys, that indicated a dip in hurricane occurrence.

The team used two guides to regional shipwrecks to compile their data: Robert F. Marx’s Shipwrecks in the Americas: a complete guide to every major shipwreck in the Western Hemisphere, and Shipwrecks of Florida: A comprehensive listing, by Steven D. Singer.

The books, combined with ship logs, allowed the researchers to compile a list of Spanish ships known to have been wrecked by storms during the hurricane seasons of 1495-1825. The team found that the hurricane patterns from the shipwreck database closely matched Florida Keys tree-ring chronology of hurricanes from 1707-1825.

To verify their method, the team compared the tree-ring records to the systematic recordings of hurricanes from 1850-2009. Again, the patterns matched.

The new research provides an annual record of Caribbean hurricanes going back to the year 1500—right about the time that Christopher Columbus first reached the New World.

“By combining shipwreck data and tree-ring data, we are extending the Caribbean hurricane record back in time, and that improves our understanding of hurricane variability,” said lead author Valerie Trouet, an associate professor in the UA Laboratory of Tree-Ring Research, in a statement.

The researchers said the new information about historical hurricane patterns could help make the models that scientists use to predict future storm activity more accurate and precise. Read more here.