Hurricane Sandy was just one of 11 billion-dollar disasters hitting the U.S. in 2012, NOAA reports.

The superstorm was the year’s most expensive disaster, causing $65 billion in damage in seven east coast states. Last year’s drought/heatwave in the western half of the country was the second-most expensive at $30 billion. Rounding out the list of 11 billion dollar disasters are incidents of severe weather, tornadoes, wildfires and Hurricane Isaac.

I feel so used.

I have an intense hatred of plastic bags. I have learned that it is not very hard to remember to bring a reusable tote with you to the store. You can stash one in your purse, because they roll up to nothing. You can keep one in your car, if you have a car. You could even tie one to your bike and leave it for emergency beer runs. No one will steal it, because EVERYONE HAS REUSABLE TOTE BAGS. They are everywhere. They should be used.

While my personal campaign to get New York City to ban plastic bags along with giant sodas continues, you may enjoy this excellent mockumentary produced by Heal the Bay, a Southern California-based group that works toward healthy coastal waters. I almost feel glad for the plastic bag as it makes its heroic way to its petrochemical-based friends in the Great Pacific Garbage Patch. But not quite.

The National Trust for Historic Places just released its 26th annual Most Endangered Historic Places List, a yearly collection of America’s heritage sites at risk. Some are in coastal areas with ties to America’s nautical heritage, from a Massachusetts lighthouse to a salmon cannery in Alaska, all with fascinating historical import. To wit:

Gay Head Lighthouse, Aquinnah, Massachusetts
The picturesque lighthouse on Martha’s Vineyard was built in 1799 during the Adams administration (!). More importantly, one of the Native American harpooneers in Moby-Dick hailed from Gay Head. In Chapter 27, Melville introduced “Tashtego, an unmixed Indian from Gay Head, the most westerly promontory of Martha’s Vineyard, where there still exists the last remnant of a village of red men, which has long supplied the neighboring island of Nantucket with many of her most daring harpooneers. In the fishery, they usually go by the generic name of Gay-Headers.” The lighthouse is in danger of toppling over the Gay Head cliffs due to erosion.

James River, James City County, Virginia
The 348-mile river snakes from the Appalachian Mountains east to the Chesapeake Bay, and is at risk from inappropriate development on its banks. The wide and sheltered delta was the site of the Jamestown settlement in 1607, the first permanent British colony in the New World. While the 500 colonists started out with undoubtedly high hopes, starvation reduced them to cannibalism just two years after landing, according to recent research. But “first they ate their horses, then dogs, cats, rats, mice and snakes. Some, to satisfy their cruel hunger, ate the leather of their shoes,” the BBC reported last May, proving that John Franklin was not the first British explorer to eat his boots.

Kake Cannery, Kake, Alaska
What’s so special about a dilapidated salmon cannery, built between 1912 and 1940, in Alaska’s Inside Passage? “The [18 buildings] respond architecturally to the catching, processing and canning of North Pacific salmon and to the housing of Alaska Native, Euro-American, Oriental, Filipino, Black and other foreign labor employed at the Kake Cannery …Steady use maintained the sprawling warehouse-type buildings in good condition until 1977, when the cannery closed indefinitely for economic reasons after several years of poor salmon runs,” says the 1997 NRHP registration form. “Developed and modified over the years to accommodate new machinery, labor practices and mandates, and fishing technology, the cannery complex reflects the labyrinth of social and technical changes occurring in the first half of the 20th century.”

And here are the non-nautical sites in desperate need of restoration:

Abyssinian Meeting House, Portland, Maine
Established in 1828 as the first house of worship for African-Americans in Maine

Historic Rural Schoolhouses of Montana, statewide
A collection of 19th and early 20th century one- and two-room schoolhouses used by frontier families

San Jose Church, Old San Juan, Puerto Rico
The oldest site on this year’s list, the church dates from 1532 (!) and is a rare example of Spanish Gothic architecture

Village of Mariemont, Cincinnati, Ohio
Designed between 1921 and 1925, it’s one of America’s most significant examples of town planning

I can name a handful of close-up encounters with nature that have changed my life. One was snorkeling off the coast of Maui in 1998, where a green sea turtle sidled up to my face mask and seemed to want to get to know me.

Another was going on my first whale watching trip from Provincetown, Mass., in 2007. I remember this trip for three reasons. Poor Shannon Leigh O’Neil got horribly seasick. We found more than 30 humpback whales moseying through Stellwagen Bank Marine Sanctuary. And the naturalist on board was so flabbergasted by the number of cetaceans that she kept shouting, “Whale at 12 o’clock! 4 o’clock! There’s one at 6:30!” through the microphone.

I knew whale watching was a magical experience in the natural world. Now a study released by the Whale and Dolphin Conservation Society (WDC) proves that whale watching also inculcates a greater concern for marine mammals and marine conservation among people who go on the trips.

This is the first study that looked at an interest in marine conservation and whale well-being as possible results of going on whale watching trips. Previous studies had only examined the economic benefits of the whale watching industry.

The result of my limited experience in marine photography: a humpback near our whale watching boat, Provincetown 2007. (Photo: Kat Long)

The results showed that whale watchers didn’t know how to support the conservation of marine mammals before the tour started. Afterward, respondents had become more aware of conservation efforts and were alarmed about the health of marine environment.

“We can now say that responsibly watching whales in the wild has the potential to benefit the planet through increasing one’s awareness of marine conservation,” said Vanessa Williams-Grey, WDC’s head of responsible whale watching. “This survey confirms our need to support programs like Whale SENSE, which recognizes commercial whale watching companies committed to a higher standard of whale watching.”

Shannon Leigh O’Neil and I relaxed for a few hours at the Brooklyn Botanical Garden one spring weekend. The cherries and Japanese Garden are the most photogenic and classically beautiful areas of the park. I happened to discover the native flora garden, a semi-wild plot of upland woods, bog plants, ferns and wildflowers. While our native flowers aren’t always the showiest, I love their subtle dignity. 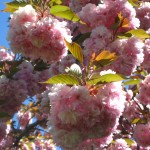 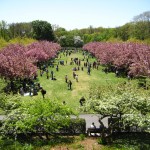 Cherries in the Japanese garden 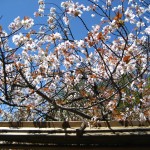