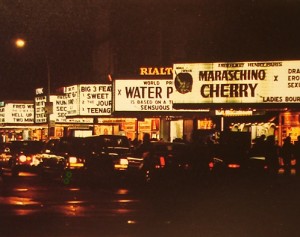 I recently put on my Social Historian Hat for an interview with The Rialto Report, an amazing collection of oral histories about “the golden age of adult film.” Producer Ashley West and I chatted about my book, The Forbidden Apple: A Century of Sex and Sin in New York City; Marty Hodas, the man who brought peepshows to Times Square in the 1960s; and the sexual culture of New York City in those exciting years. In addition to me, the podcast features Hodas’ first audio interview since the 1970s and comments from Anthony Bianco, author of Ghosts of 42nd Street: A History of America’s Most Infamous Block.

Check it out here!