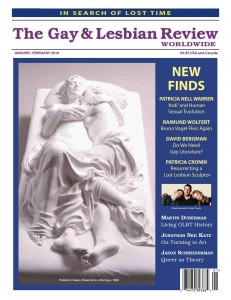 I wrote a hybrid book review-slash-historical analysis of Edmund White’s recent book, City Boy: My Life in New York During the 1960s and ’70s, for the Gay and Lesbian Review.

Though White’s memoir covers many topics in his peripatetic existence between in the ’60s and ’70s, I focused on his first-hand experiences in New York’s underground gay bars, his cruising adventures in the Village and his attitudes about sexuality. I felt that City Boy was most valuable when relating eyewitness accounts if quotidian gay culture in the 1970s, and less interesting when White recalls his friendships with literary lions, poet laureates and Peggy Guggenheim’s circle in Venice.

Yes, I realize most readers would probably find the opposite true. But my favorite book of White’s is The Joy of Gay Sex (published 1977), so I suppose that makes sense.

I can also recommend White’s recent novel Hotel de Dream, which also takes place in New York, though in the Gilded Age rather than in the Age of Aquarius.