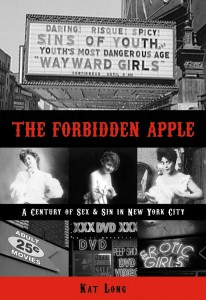 A Century of Sex and Sin in New York City

“Kat Long’s The Forbidden Apple is a fast-paced and vivid overview documenting the conflicts between evangelical moralists and defenders of sexual expression, commercial and otherwise.  Anyone interested in New York City or sex will have to pick this up.”—Timothy Gilfoyle, author, City of Eros and A Pickpocket’s Tale

“Kat Long has provided a fascinating overview of sex in New York City since the Civil War.  Everything you always wanted to know—and a lot you would never have suspected!”—Kevin Baker, author, Strivers Row, Paradise Alley and Dreamland

The Forbidden Apple: A Century of Sex & Sin in New York City reveals the endless battle between outlaw sex and moral righteousness that has been fought on the streets of America’s most licentious city.

Beginning with Gilded Age New York, where upper-class men of society routinely slummed with prostitutes and burlesque dancers—then wrote scathing condemnations of the “Lost Sisterhood” for the next day’s papers—and ending with Rudolph Giuliani’s crackdown on the city’s sexual life in the 1990s, The Forbidden Apple details the major trends in New York’s sexual history since the Civil War, including the Victorian-era battles over prostitution; the women’s movement at the turn of the twentieth century; the hedonistic roaring twenties; the rise of Times Square as the city’s sexual epicenter in the 1940s and 1950s; the birth of the gay rights movement in the 1960s; the decadence and pornography of the 1970s; and the AIDS epidemic of the 1980s.

The first-ever comprehensive sexual history of New York City, The Forbidden Apple shows how most of this country’s most important sexual movements began in New York, and also reveals how the repressive forces of morality and decency have waged war against the forces of sexual freedom.